Chumphon is the gateway to the Southern part of Thailand. It may seem like a small province but it has a lot of beautiful places to visit especially for snorkeler and scuba divers. Chumphon is a home largest sea anemone in Thailand. The highlight that you will have a chance to see in this area is ‘Whale Shark’.

Here are 10 snorkeling points in Chumphon that you have to visit. But first, let’s see things to know before you go.

From April to October is the best period to visit Chumphon, especially in May. The underwater is noticeably clear and suitable for snorkeling and scuba diving.

10 Snorkeling Points and Things You Will See!

We can separate Chumphon sea into 3 divng zone.

It a large rock island that human are unable to live. Its underwater has lots of fish schooling around and a group of beautiful sea anemones. The fish you may see are Coral catfish, Grouper, Butterfly fish, Moray eel, Batfish, Lionfish, Yellowback fusilier, and Pink skunk clownfish.

The island is also unsuitable for human to live but it's a home for the swallows. Koh Ran Ped is one of the most beautiful point for snorkeling to see huge sea anemones. Apart from sea anemone, you will see Alcyonacea, Black Sun coral, Leather coral, white coral, golden coral, and you have a chance to see a stingray too. 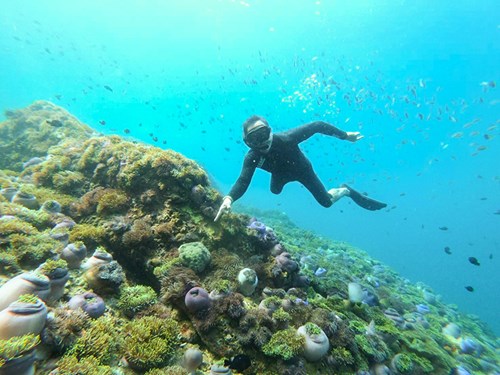 The highlight of island is whale shark and batfish that you will see in the area. This island has a lot of staghorn coral, grouper, butterfly fish, batfish etc. In 2011, the Royal Thai Navy has sunk the decommissioned landing craft "H.T.M.S. Prab 174" as an artificial coral reef in the south of Ngam Noi island. Now, it's another popular spot for scuba diving.

Ngam Yai island is an island that locals use for collecting the swallow’s nest. The marine creature you may found here are skunk clownfish living inside sea anemone, angelfish, sea turtle and several corals. The true highlight is not the underwater but it's "The Right Hands of Buddha", a huge rock formation on the island that looks like a human's hand.

The island has a shape of the skull (Kha Loak in Thai is mean skull), so this is a reason that it was named the skull island. Thing to see at this spot are beautiful coral reef such as staghorn coral, barrel sponge, brain sponge and also fish like grouper, and yellow tail fusilier.

This limestone rock island has many holes and caverns that were eroded by sea water. Some parts of the island may look like there is a big hole that we can swim pass through it, but it is quite dangerous. You may not allowed to swim but taking a photo is alright. Marine creture you may see in this area are staghorn coral, brain coral, anemone, sailfish. Also, a blacktip reef shark can be found at this spot as well. These sharks are friendly and not aggressive but  you should not touch them.

Matra island has a beautiful white sand beach which we can snorkeling to see hump corals and several marine species for example clownfish, wrasses, moon wrasses, puffer fish, giant clam. Also, there is rare animal that you can find on this island which is ‘Hairy leg mountain crab’.

La Wa island is a small island that has no beach. Underwater there is a mountain of sea anemone that you can spot Pink skunk clownfish. 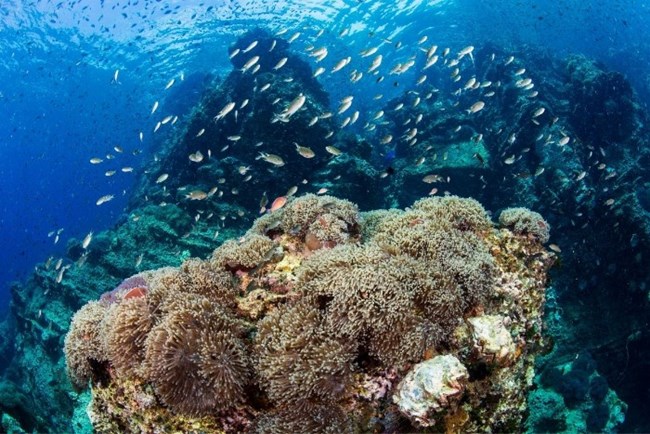 One of the island that you can snorkeling from the beach. However, it may have less corals compare to the other nearby islands. On the island, it's a limestone rock which is suit for habitation of the swallows (same as Ngan Yai island) and bats.

‘Raet’ in Thai means rhino which refers to the shape of this island which is like a rhino. Also, it has no beach to walk on but we can snorkeling to see sea anemones, corals, and fish around the island.

We can separate these all 10 snorkeling points into 2 main zones, which are in Bang Berd area, Ban Koh Teab area and Chumphon town. These three areas area not close to each other, so you need to know where to stay and plan it carefully.

All are detail about the piers that you need to know before finding the right hotel to stay. If you have a car and do not want to stay at more than 1 hotel, the best area to stay is in Chumphon town or Tung Wua Lan beach. It is 1 hour or 66 km. to Bang Berd area (plus 20 minutes to Baan Koh Teab area).

We hope that this will help you to decide your vacation in Chumphon. If you are looking for fulfill your dream of seeing whale shark and the biggest wall of sea anemone. Travelling in Chumphon is the best choice for you.

We are recommend buying a package from reliable tour operators. If you want to rent a longtail boat and go snorkeling by yourself without local guide. It is quite risky and not worth for your money. As you know, Chumphon is not a popular tourist destination comparing to Phuket or Krabi. Another factor why buying tour package is suggested because lunch, boat and tour guide are included. Those trips are;

Moreover, if you are the professional scuba diver, you can book a scuba diving day tour in Chumphon.

Male
Female
Please verify reCaptcha
Sorry! System is error You had just registered for too many accounts within a short period. Please try again later.

Your password has been reset. The system has already sent you for the new password.
Sorry! System is error You had just request resetting password for too many times within a short period. Please try again later. Back to Login

This e-mail is for contacting and receiving ticket voucher from Ticket2Attraction.com only.
Sorry! System is error